The Pharisee becomes the publican 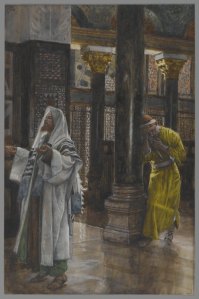 One thing that can cause me discouragement is dealing with besetting sin–you know that thing you keep taking back to confession over and over.  One of mine is critical thinking.  A few years ago I read Sr. Ruth Burrow’s autobiography, and in it she spoke about this being one of her ongoing faults as well.  However, she found what I think is a very clever way to deal with it:

Perceptive, quick to see the flaws in another, I was prone to criticism, finding a certain satisfaction in seeing another at fault as though this, in some way, raised me up.  I knew that no fault would so displease our Lord or stop his grace as this harsh judgment on his children.  I realized I had the mentality of a pharisee but, I thought to myself, if a pharisee had turned to our Lord and admitted his hardness of heart, his crabbed, mean spirit and asked for help, our Lord would have helped him.  So I did the same.  The pharisee became the publican.  I came to realize that temptations to pride, the sin of the pharisee, could make one a publican.  The stone which the builders rejected could become head of the corner.  I tried to use these bad tendencies to grow in humility.

And the Angels danced, don’t you think?

2 thoughts on “Friday: from the archives”