Love this post from Bill Donaghy over at The Heart of Things:

Bacon and the Glorious Subterfuge of Christmas 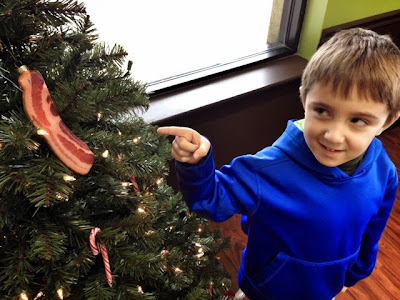 After Mass yesterday, which inaugurated the First Sunday of Advent, we took the family (and me dear ole’ Da who’s visiting from Maine) to a fairly new breakfast venue in town called The Bacon Press. They had an incredible array of bacon themed and bacon saturated fare, and needless to say, I felt as if I were still participating in the afterglow of the Heavenly Banquet, yeah, as if the source of all grace flowing from the altar at St. Patrick’s had indeed perchance sent a little trickle of glory into said establishment. If anyone is scandalized by what I just wrote I apolo… no, you have not yet tasted bacon.