I know it’s Ordinary Time, but our house still has one foot in the Christmas season.  As most of you know, we started following the Vatican custom of leaving our lights and crèche up until February 2, the Feast of the Presentation (which is 40 days after Christmas).  (Check out the webcam at St. Peter’s if you doubt me–or even if you don’t doubt me.  It’s so cool.)  I say all of this as an excuse to share this meditation by Fr. Richard G. Smith on a seventeenth-century crèche.  It’s good anytime of the year:

Most tourists visiting New York City in December find their way to the famous Christmas tree in Rockefeller Center.  Unfortunately, far fewer will discover a less famous, though even more beautiful, tree a few blocks north of Rockefeller Center at the Metropolitan Museum of Art.  Actually, the tree itself is not particularly  noteworthy–it is the seventeenth-century crèche from Naples, Italy, which surrounds the tree that makes it worth a visit.  There we see all the usual character: dozens of angels, the shepherds and sheep, the wise men, the donkey and ox, Mary and Joseph.

What makes the crèche so unusual, though, are all the other scenes around it–vignettes of everyday life in seventeenth-century Naples.  Among the many scenes  we see a man walking a dog, a little boy dragging his mother somewhere, a woman baking bread in the kitchen, a man sleeping by the water fountain, even a young man flirting with a young woman.  There is something beautifully human and real about these representations.  And while they are all very beautiful, ultimately they are just scenes of simple people in their ordinary, everyday lives.  That is what is so wonderful about the crèche: if any one of those ordinary people living their ordinary lives were to just turn the corner (around the tree), they would find the wondrous scene of the newly born Jesus surrounded by Mary, Joseph, and the dozens of angels.  The newborn Jesus is so clase to any one of them, that they could walk up and touch him.  And that’s the point of the crèche.  God is that close.

In St. Luke’s telling, the birth of Jesus is revealed first of all to ordinary people, people like you and me, in the midst of their work who only need turn the corner to discover the God who wants no distance between us and himself.

Here’s a photo of the crèche.  You can see more detail here. 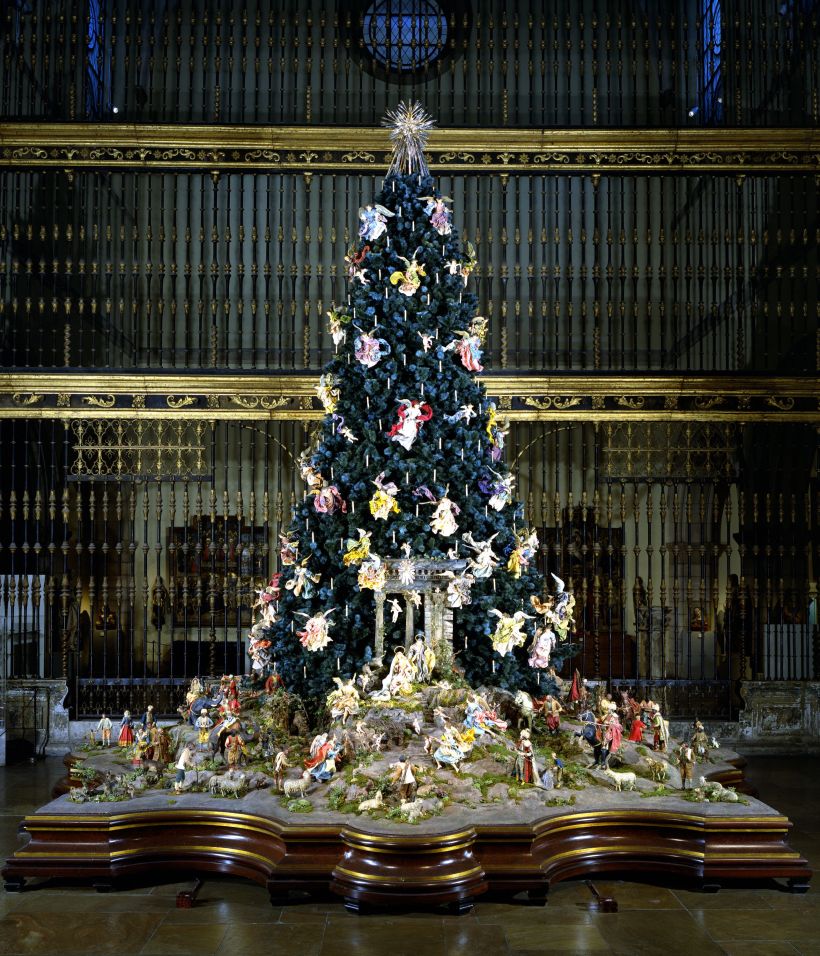