Sometimes an old hymn is just what we need to lift up our hearts and souls.  So many of the old hymns are laced with Scripture, and singing them speaks much deeper to our hearts than we know.  (God’s word always goes much deeper than we know.) Here is a beautiful rendition of O God, Our Help in Ages Past (with subtitles so you can sing along!).

The reason why singing is such a splendid shield against the fiery darts of the devil is that it greatly helps us to forget him, and he cannot endure being forgotten.  He likes us to be occupied with him, what he is doing (our temptations), with his victories (our falls), with anything but our glorious Lord.  So sing.  Never be afraid of singing too much.  We are much more likely to sing too little.  (Amy Carmichael)

A story from St. Francis de Sales that I call to mind when prayer gets “tough”: 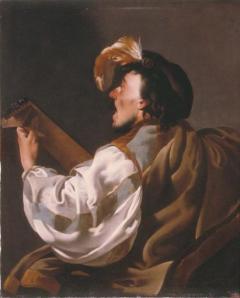 One of the world’s finest musicians, who played the lute to perfection, in a brief time became so extremely deaf that he completely lost the use of his hearing.  However, in spite of that he did not give up singing and playing the lute, doing so with marvelous delicacy by reason of his great skill which his deafness had not taken away.  he had no pleasure either in singing or in the sound of the lute, since after his loss of hearing he could not perceive their sweetness and beauty.  Hence he no longer sang or played except to entertain a prince whose native subject he was and whom he had a great inclination as well as an infinite obligation to please since he had been brought up from his youth in the prince’s court.  For this reason he had the very greatest pleasure in pleasing the prince and he was overjoyed when the prince showed that he enjoyed his music.  Sometimes it happened that to test this loving musician’s love, the prince would command him to sing and immediately leave him there in the room and go out hunting.  The singer’s desire to fulfill his master’s wishes made him continue his song just as attentively as if the prince were present, although in fact he himself took no pleasure out of singing.  He had neither pleasure in the melody, for his deafness deprived him of that, nor that of pleasing the prince, since the prince was absent and hence could not enjoy the sweetness of the beautiful airs he sang. (On the Love of God, Book 9, Chapter 9)

The power of music.

I am currently reading the prison letters of Jacques Fesch (book details above under “Books to read – biographies”), a self-described juvenile delinquent, found guilty of robbery and murder, but subsequently gave his life fully to Christ.  A very inspiring read.  His cause for canonization is now open.  The thing I wanted to share here is a paragraph from a letter in which he described a bit of what his life was life before conversion.  (Read it, and then I’ll comment on what struck me.)

During the six or seven years when I lived without faith, I did evil, much evil, less through deliberate malice than through heedlessness, egoism and hardness of heart.  I was incapable of loving anyone.  Father, mother, wife, child–I was indifferent to them all.  I felt no warmth of emotion for anyone or anything, unless perhaps it was music. (p.32)

It was that last phrase that struck me–and reminded me of the then Cardinal Ratzinger’s reflections in my previous post about the power of music.  It wasn’t music that brought about Fesch’s conversion, but it is striking to me that that was the only thing he mentioned as evoking any emotion in him at that time in his life.  Music, reflecting the true beauty of God, is extremely powerful.  I think of pieces like Ralph Vaughan Williams’ “The Lark Ascending” which I had the privilege of hearing performed in a Scottish cathedral years ago, or Rachmaninov’s liturgical pieces that move one’s heart to worship.

What music moves you to greater love of God?