This holiest of weeks I would like to share a poem or piece of art each day, hopefully drawing you deeper into the Great Mystery we are celebrating.  I begin with one by Malcolm Guite.

We come now, with Palm Sunday, to the beginning of Holy Week and in the sonnets that follow I have explored the truth that what was happening ‘out there’ and ‘back then’ as Christ entered Jerusalem is also happening  ‘in here’ and ‘right now’. There is a Jerusalem of the heart. Our inner life also has its temple and palaces, its places of corruption, its gardens of rest, its seat of judgement.

I am grateful to Linda Richardson who has given me permission to share with you her series of remarkable paintings, ‘The Faces of Holy Week’. These will be on display, together with my poems, in the resurrection chapel in St. Mary’s Linton throughout Holy Week, do look in and see them if you are in the area. You can also look at these paintings and others on Linda’s Webpage.

Linda writes about this picture:

Very often I have thought that I knew what Jesus was about, what he was doing and why he was doing it. Then later I realise it was more than that, something deeper, and my understanding is stretched, and later is stretched again. So it is with Palm Sunday. Jesus is always with me on on my journey but he is always behind me and he is always beyond me.

In this painting Jesus face is elusive, and the features are gestural brush strokes, but energetic and visceral. It is a mixed media painting and within the face is the palm branch that I received at the Palm Sunday service last year. In the painting there is a ceremony from the past, a reminder of the cross that is to come, but if we don’t give our attention, we might miss the present day revelation of Palm Sunday. What will Jesus say to us today? We might imagine there is nothing new to learn, but as our “easy feelings” go through the familiarity of a Palm Sunday service are we still listening?

Palm SundayNow to the gate of my Jerusalem,

The seething holy city of my heart,

The saviour comes. But will I welcome him?

They raise their hands, get caught up in the singing,

And think the battle won. Too soon they’ll find

The challenge, the reversal he is bringing

Changes their tune. I know what lies behind

The surface flourish that so quickly fades;

The hardness of the heart, its barricades,

And at the core, the dreadful emptiness

Of a perverted temple. Jesus  come

Break my resistance and make me your home.

Advent and the little girl, Hope

Hope means hoping when things are hopeless, or it is no virtue at all.”

In a matter of two weeks, the Nazis had roared through Luxembourg, crushed the Netherlands, marauded through Belgium and blitzed deeply into France. The French Army and British Expeditionary Force found themselves pressed onto the beaches of Dunkirk with their backs to the unforgiving waters of the English Channel. The Americans across the Atlantic made it very clear that they wouldn’t send their boys to any foreign wars. And Great Britain looked increasingly alone.

But as the grim events inexorably unfolded, the bulldogish Prime Minister Winston Churchill made it clear to his Cabinet: There would be no surrender. In the darkness of those days – days which anticipated the Blitz of screaming bomber attacks on the cities of England – Churchill growled to his band of brothers.

The House [of Commons] should prepare itself for hard and heavy tidings. I have only to add that nothing which may happen in this battle can in any way relieve us of our duty to defend the world cause to which we have vowed ourselves; nor should it destroy our confidence in our power to make our way, as on former occasions in our history, through disaster and through grief to the ultimate defeat of our enemies.

And within days, Churchill further pronounced,

I am convinced that every one of you would rise up and tear me down from my place if I were for one moment to contemplate parley or surrender. If this long island story of ours is to end at last, let it end only when each one of us lies choking in his own blood upon the ground.

That was the first and greatest weapon raised against the Nazi menace. Hope was the light that illuminated blood-stained rocks on embattled Pacific islands and cold corners of the blackest concentration camps. It fired the chilled soldiers in the wintry foxholes of Bastogne and it refreshed the dirt-coated liberators in North Africa. Hope wasn’t a component of victory; it was the key to it.

That is the essence of Advent.

In dark days of disease and loneliness, fear and guilt, sin and death, a dusty prophet declared to an enslaved nation,

The people who walked in darkness have seen a great light; Upon those who lived in a land of gloom a light has shone. (Isaiah 9:1)

In a cultural backwater occupied by fearsome soldiers and short, unforgiving lives, a peasant girl was visited by a heavenly creature,

Hail, favored one! The Lord is with you. Do not be afraid, Mary, for you have found favor with God. Behold, you will conceive in your womb and bear a son, and you shall name him Jesus. He will be great and will be called Son of the Most High – and the Lord God will give him the throne of David his father, and he will rule over the house of Jacob forever, and of his kingdom there will be no end.  (Luke 1:28, 30-33)

An expectant mother and adoptive father, wise men traveling from afar, shepherds sensing a change in the chill wind on the edge of town – all were drawn by faith, but pushed by hope.

What is this strange thing, hope?

Perhaps the French poet, Charles Peguy, described it best in The Portal of the Mystery of Hope.

The faith that I love best, says God, is hope.
Faith doesn’t surprise me.
Its not surprising
I am so resplendent in my creation…

Charity says God, that doesn’t surprise me.
It’s not surprising.
These poor creatures are so miserable that unless they had a heart of stone, how could they not have love for one another.
How could they not love their brothers.
How could they not take the bread from their own mouth, their daily bread, in order to give it to the unhappy children who pass by…

What surprises me, says God, is hope.
And I can’t get over it.
This little hope who seems like nothing.
This little girl hope.
Immortal…

Yes, that’s it. Hope is a precious, vibrant, beaming little girl who loves not only what is, but what will be.

Oh, it is true. At times in our lives, things can look a little bleak.

The essence of Advent is a little girl, Hope.

Come forth from the holy place,
Sweet Child,
Come from the quiet dark
Where virginal heartbeats
Tick your moments.

Come away from the red music
Of Mary’s veins.
Come out from the Tower of David
Sweet Child,
From the House of Gold.

Be born, sweet Child,
In our unholy hearts.

Come to our trembling,
Helpless Child.
Come to our littleness,
Little Child,
Be born unto us
Who have kept the faltering vigil.
Be given, be born,
Be ours again.

Come forth from your holy haven,
Come away from your perfect shrine,
Come to our wind-racked souls
From the flawless tent,
Sweet Child.

Be born, little Child,
In our unholy hearts.

My own heart let me more have pity on; let
Me live to my sad self hereafter kind,
Charitable; not live this tormented mind
With this tormented mind tormenting yet.
I cast for comfort I can no more get
By groping round my comfortless, than blind
Eyes in their dark can day or thirst can find
Thirst’s all-in-all in all a world of wet.

December 23, 2016 Sr. DorceeLeave a comment
O Emmanuel
O come, O come, and be our God-with-us
O long-sought With-ness for a world without,
O secret seed, O hidden spring of light.
Come to us Wisdom, come unspoken Name
Come Root, and Key, and King, and holy Flame,
O quickened little wick so tightly curled,
Be folded with us into time and place,
Unfold for us the mystery of grace
And make a womb of all this wounded world.
O heart of heaven beating in the earth,
O tiny hope within our hopelessness
Come to be born, to bear us to our birth,
To touch a dying world with new-made hands
And make these rags of time our swaddling bands.
Malcolm Guite

Those heavy days, the Child cramped
within you and girding his limbs,
your lungs squeezed breathless-high,
the ordinary, unnerving simmer
of black waters within, Woman,
what did you think?

Or was thought
all prayer—trust in the buds
of epiphanies, the unquantifiable
blood to be let. But Mother,
those unspeakably swollen days,
olives combed out of ashen leaves,
or wine leeching out its vinegar smell,
did you feel the tug of split hearts,
in city streets, at tabernacles, in bars?
As your belly drew down, drawn
by hormones and truth, did you weigh,
too, the clumsy imploring down all
our bloodlines, for this saving parcel of flesh?

Not all gold forms crowns or pours gilded decks
Down rivers rowed by slaves in chains below
Not all gold, not all gold will you find so.

There is a gold so sweet and free you’d cry
To hold, though freely let it from you fly.
Beyond reach this gold, of hand but not eye,
Appears above you in the morning sky
And lights the edges of the tallest leaves
Dancing in very tops of all the trees.

Before the wind wakes and shakes down the dew
It shatters green, this gold, the last bit of night
And scatters little diamonds from the height
To the waiting eye and memory.  You
Will find it so at dawn’s coming when with ease
In golden air, clear shifting, shaping, still
You spy shimmering in morning breeze,
The gold of God and his creating thrill. 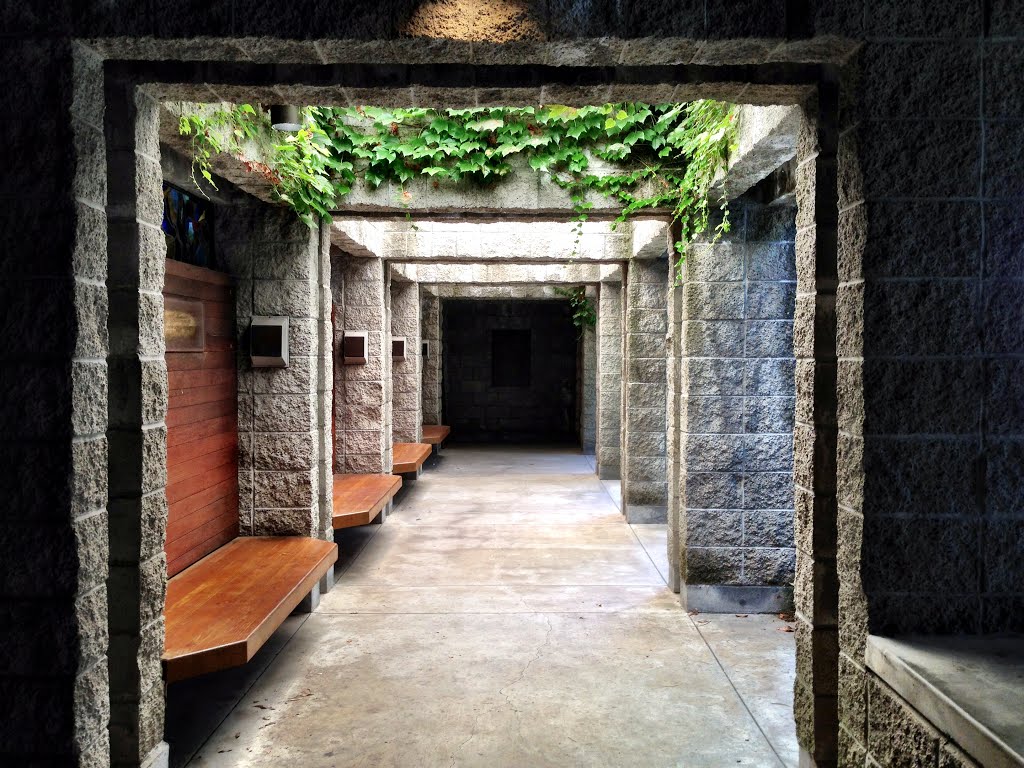 Mary, in you
We see the flowering
Of our human beauty
And  hear
The songs of God.

Stay with us now
And always.

Advent is a season of waiting:
for calendar chocolates, promised presents, Santa’s steps.
Advent is a season of longing:
for life, and light, and hope beyond this world.
In Advent, we think we are the ones who are waiting.
But I think of the annunciation,
in Leonardo Da Vinci’s Italian colours:
Mary is surprised, her left hand curled into a question mark,
but it is Gabriel’s head that is bowed low,
The Archangel holding his breath for her answer.
All heaven was waiting on a human word
before the Word would be made human.
Before God became incarnate,
God waited for human assent.
***
God was in the waiting,
the liminal moment when heaven held its breath.
I wonder about the waiting;
As my body groans and yearns for an eternal home,
the pulling of my soul towards heaven;
Could it be that God is waiting for my words—
Could it be that God’s soul is pulling too?

"Bring your lamp to those without light, enkindle the flame of love in those without hope." (Tagore) ~from a holy card I picked up in Rome in 2005 . . . I began this blog as a place to share some of the things that have increased my hope during challenging times--with the hope that it may do the same for others as well. I welcome your comments.
Join 441 other followers
Follow Witnesses to Hope on WordPress.com